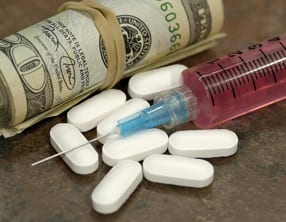 If you are facing drug charges in Fort Worth, you should know that you are not alone. Drug charges are scary, but with the help of an aggressive, experienced defense attorney for drug charges you could potentially get your case dismissed in certain situations. Our office is currently accepting appointments, and all consultations are free. Below is a guide to help you understand the different types of drug charges in Texas and what the possible fines and penalties are for a conviction. Get in touch with our firm to schedule a free consultation with a defense lawyer. If you’re in need of bond in Tarrant County, we offer a bail bond service available by phone 24 hours for your convenience.

Do I Need a Defense Lawyer for a Drug Crime in Fort Worth?
If you were charged with any of the drug crimes below, we highly recommend that you retail legal counsel (aka, hire a lawyer).

Under Texas law, drug crimes are defined as an offense that involves the possession, sale, use, manufacturing or growing of any controlled substance/illegal narcotic. If you have been charged or arrested for conspiring to sell, possess, or manufacture drugs you need an experienced drug crimes lawyer. Some examples of the various types of drug charges in Texas include but are not limited to:

Drug Manufacturing crimes include everything from marijuana cultivation to methamphetamine labs and other means by which to manufacture or produce illegal drugs. Growing marijuana, compounding drugs, or making any combination of drugs illegally to sell or distribute are all considered manufacturing drugs under Texas law.

Drug Manufacturing. Drug Manufacturing is a serious felony crime that, depending upon the charge and the circumstances of your case, carries with it the prospect of 6 months in a state jail facility to 99 years in prison and thousands of dollars in fines. If you have been charged with this type of offense, you need an aggressive and experienced drug charges defense lawyer who will fight for you.

Punishment for Drug Charges. The range of punishment for a drug conviction depends upon the amount/weight of the drugs and the specific circumstances of your case. You could be facing anywhere from a few days in the Tarrant County jail to life in prison if you are convicted and sentenced for your drug charge. Additionally, a conviction for a drug crime in Texas usually carries with it a driver’s license suspension and a requirement to complete mandatory drug and alcohol rehabilitation.

Whether you have been charged with felony or misdemeanor drug charges, the Hampton Law Firm will carefully investigate and analyze your drug charge and will fight to protect your freedom and your legal rights. Call now to schedule a free consultation with our drug charge defense lawyers.

Texas law has a statute criminalizing conspiracy to commit an unlawful act, such as manufacturing or distributing drugs. In order to prove a conspiracy charge, the prosecutor must prove that two or more people agreed to commit a criminal offense, and at least one of them made one overt act in an attempt to commit the offense. Drug conspiracy means that two people can be together and one of them says to the other, “Let’s go find 20 kilos of cocaine and then sell it.” The other one says, “Okay. Let’s do it.” Later, one of them asks a third person for directions to a place to buy cocaine that can later be sold. The drug conspiracy is now complete. Two people had an agreement to sell cocaine and one made an overt act in pursuance of the agreement. If convicted of conspiracy to sell cocaine, the penalty can be the same as if they actually sold cocaine.

This means that you can be convicted, jailed, and sentenced the same for just planning to sell cocaine just as severely as if you had actually made the sale. Don’t take a plea deal, you need a lawyer for drug charges like conspiracy who know how to defend these audacious cases.

Why Do I Need a Lawyer for Drug Conspiracy Charges If I Didn’t Commit a Crime?

Texas prosecutors often add conspiracy charges to the offenses of manufacturing or intent to distribute a controlled substance, because it is easier to get a conviction for the conspiracy offense than for the actual commission of the offense. Also, conspiracy to commit the offense and the commission of the offense are two separate crimes, so the defendant has two charges to defend against and, if convicted, will have two felony convictions. In Texas, the penalties for drug conspiracy charges are commonly the same as for the actual crime, so it is imperative to retain a drug conspiracy lawyer who can successfully fight all drug charges.

Under Texas Penal Code, section 71.02, the only elements of a drug conspiracy charge are:

Under Texas law, penalties for repeat drug charge offenders are substantially enhanced, even if a great deal of time has passed between drug offenses.  In order to have the penalty increased, the state must provide documentary proof that the defendant has been previously convicted of specific drug offenses. The proof must consist of documents showing the judgment and sentence of each prior offense and the amount of jail or prison time the defendant actually served.

Enhanced penalties for repeat offenders may result in a life sentence in prison, even if the offense would carry only a penalty as a state felony if it had been the first offense. The actual sentence imposed depends on the specific drug involved in the offense currently being prosecuted, and the amount of the drug the prosecution proves the defendant possessed.

If you have been charged with possession of a controlled substance of any kind, whether this is your first offense or you have had previous drug offense convictions, you are facing a potential life sentence. It is of the utmost importance that you have an experienced drug charges attorney in your corner, fighting the charges on your behalf. Call the drug crime defense lawyer at The Hampton Law Firm to schedule a free consultation so that you can begin the fight for your freedom.

Contact our Fort Worth defense lawyer for drug charges today to schedule a free consultation at 817-435-2909.

Even if you believe you have no reason to be arrested, it’s important to remember that cooperating with [...]

This is a common misconception. Here’s why: Although bondsmen play a [...]

Robbery vs. Theft: Like Everything in Texas, There’s a Big Difference

Texas is known for two things: its strong sense of justice and an even stronger sense of independence. Every man’s home is his castle in Texas. This means that personal property is protected heavily, both legally and personally.

Both of the personal property crimes of theft and robbery are prosecuted [...]

You made it through Thanksgiving without a family political spat (Or maybe they didn’t.) Still, the holidays aren’t over yet. There’s at least one more family dinner before the New Year.

This time, tensions surrounding presidential impeachment has made political discussions that much more tense. In fact, we’d venture “impeachment” [...]

How Common Is Underage Drinking Over Holiday Break in Texas?

For teens, the holidays are a time of fun and celebration, particularly because school is out for winter break. College underclassmen may also be seeing their high school friends for the first time all semester.

All of these factors contribute to high rates of underage drinking over the holidays. Teen [...]

A criminal record can follow you for years. Even after you have done your time, rental opportunities or job offers can be taken away once someone discovers your past mistakes. Even criminal charges and arrests that never ended in a conviction can potentially hold you back.

If this situation sounds [...]