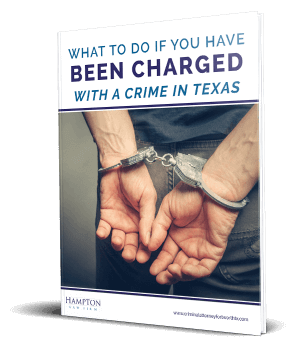 Felony vs Misdemeanors: A Former DA Breaks Down The Differences! (2021)

Have You Been Charged With A Felony In Fort Worth, Texas?

If you, a friend or a loved one have been arrested and charged with a crime in Tarrant County, Fort Worth, Arlington, Mansfield or surrounding cities, it is very important to determine if you have been charged with a misdemeanor or a felony. If you have been charged with a crime that has been classified as a felony, you need to contact the Hampton Law firm immediately. Crimes that have been classified as felonies carry with them serious consequences, including the strictest penalties and fines provided for under Texas law. Depending upon the charge and the circumstances of your case, a conviction for a felony crime can result in the imposition of a prison sentence ranging from 180 days in a Texas state jail facility to life in prison.

In Texas, Crimes are categorized into 2 types: Felony Crimes, which are the most severe level of criminal charges in Texas, and Misdemeanors, which are which are considered lower-level criminal offenses.

Capital Felonies – this is the most serious type of felony in Texas and is punishable by a death sentence or life in prison without parole. The most prominent example of a Capital Felony in Texas is Capital Murder.

1st Degree Felonies – a first degree felony charge has a penalty that ranges from a minimum of 5 years in prison up to Life in prison and up to a $10,000 fine.

2nd Degree Felonies – a second degree felony charge has a penalty that ranges from a minimum of 2 years in prison up to a term of 20 years in prison and up to a $10,000 fine.

3rd Degree Felonies – a third degree felony charge has a penalty that ranges from a minimum of 2 years in prison up to a term of 10 years in prison and up to a $10,000 fine.

Consequences of a Felony Conviction

If you have been charged with a felony crime in Fort Worth, Texas, it is important that you are not convicted of the charge. In addition to possible prison time and excessive fines, a felony conviction can actually carry far-reaching consequences that will forever alter your life. Let’s take a closer look…

When it comes to felony convictions, the most damaging consequences may not be the sentence itself. The real hardship that follows a felony conviction is the permanent stain it leaves on your criminal record.

If you receive a felony conviction in Tarrant County, Texas, you are stripped of your basic rights, which include:

The Right To Vote

After being convicted of a felony in Texas, you lose the right to vote. State law prohibits felons from voting until they complete their sentence, parole, or probation.

The good news? Texas automatically restores your right to vote once you carry out your court-ordered sentence, parole, or probation in full. Keep in mind that you will have to register again and may be required to provide evidence that you have completed your sentence.

The Right to Bear Arms

Since federal law always trumps state laws, it is practically impossible to purchase a gun by legal means if you have been convicted of a felony. If you do wish to possess a gun, you are advised to speak with an attorney to find out if you are eligible to apply for a pardon.

The Right To Serve on a Jury Panel

In Texas, any person convicted of a felony offense will lose their right to serve on a jury. You may only have this right restored if you have been pardoned. Again, consulting with an experienced Texas attorney can help you answer any eligibility questions you may have.

Additional Consequences of a Felony Conviction

In addition, to impacting your rights, a felony conviction in Texas can have serious repercussions on your professional and personal life.

With a felony conviction, you lose your right to hold public office or any public position without a full pardon. You are also disqualified from holding certain professions if you have a felony conviction. For instance, if you have aspirations to become a lawyer or a doctor or any other type of profession that requires approval from a licensing board in Texas, you may face an uphill battle being approved for the license if you have been convicted of a felony crime.

Additionally, a felony conviction will stay on your record for the rest of your life, which means that anyone can perform a background check and see your criminal history.

This background check showing your felony conviction will be available to potential employers, landlords, college application boards, and practically anyone with access to the internet. Unlike certain misdemeanor convictions, felony convictions are not eligible to be expunged from your record. Because of this, a felony conviction can severely hinder your ability to find employment, obtain housing, or seek secondary education.

At The Hampton Law Firm, our team of 4 Former Prosecutors stands ready to defend people accused of all felony crimes, some of which include:

Have You Been Charged With a Misdemeanor Crime in Fort Worth or Tarrant County, Texas?

Although misdemeanor crimes carry less severe penalties than felony crimes, a conviction for a misdemeanor charge can result in serious and long-term consequences. If you have been charged with a misdemeanor and currently have no criminal record, a conviction could result in limited employment opportunities in the future, as well as psychological and financial hardships due to probation and the requirements imposed during the term of your probation.

At the Hampton Law Firm, our team of 4 Former Prosecutors aggressively defend citizens accused of all misdemeanor crimes, some of which include:

Being charged with a misdemeanor crime is a serious matter that requires the attention of an aggressive and experienced criminal lawyer that will fight for your freedom and your legal rights. I will work to keep your record clean and limit the effects being charged with a misdemeanor crime will have on your future. Contact the Hampton Law Firm now to schedule a free consultation.