Have you been charged with unlawfully carrying a firearm, rifle, or other type of gun? It can be confusing to tell exactly what is legal and what is not when it comes to possessing a gun in Texas. Recent legislation has further blurred the lines, and many have accidentally broken the law because of this confusion. If you have been wrongfully charged for having a firearm, call an firearm lawyer today.

Under Texas law, you can openly carry a long-barreled firearm, but in order to openly carry a handgun, you must have a permit and the handgun, according to a new statute, “must be carried in a shoulder or belt holster.” Even then, you cannot carry the weapons near any college or university. Although the new open-carry law seems liberal, there are other laws that prohibit you from carrying and possessing certain weapons with restrictions on when and where you can carry them. 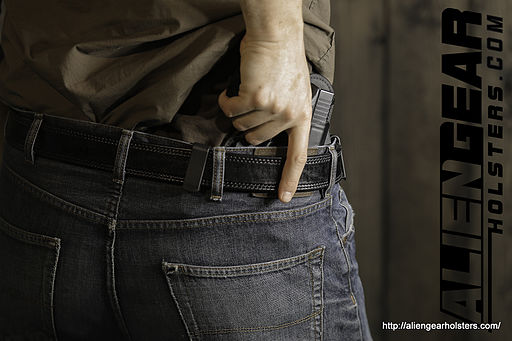 If you violate the law and are charged with a weapons or firearms offense, it can have serious consequences to your life. Depending on the circumstances surrounding the charge, and whether you have a past criminal history, if convicted, you face paying a high fine and spending a long time in prison. There are many different weapons charges under the Texas Penal Code with different penalties attached. The penalties are substantially increased if you use a weapon while committing another crime.

Regardless of whether you are charged with a misdemeanor or felony, you should seek the counsel of an experienced gun charge lawyer to help fight for your freedom.

People generally think of a gun or knife when they hear the word weapon. Under the Texas Penal Code, section 46.01, weapons are defined as:

Unless you are licensed to carry a hand gun, it is illegal for you to knowingly and intentionally carry any weapon when you are not on your own property. The penalty imposed depends on the weapon involved and where you were at the time of the offense, and you need a unlawful firearm possession attorney to help you.

The penalties are increased if the weapon is carried near a school, a place that sells alcohol, a court, race track, polling place on election day or secured area of an airport. Even if you have a legal right to carry a weapon, if you sell it or lend it to someone who does not have a legal right to have it, or allow a child to have access to a firearm that is not secured, additional penalties will be imposed.

Exceptions are made for possession of antique items. Additionally, you may transport a weapon in your vehicle as long as it is not visible.

Under Texas law, there are restrictions on your right to own and carry a weapon and where you have a right to possess certain firearms. Texas law provides that in order to carry a concealed handgun in public, you must be licensed to do so by the state of Texas. However, even if you are licensed to carry a weapon or gun in the state of Texas, you are prohibited from carrying a concealed gun or weapon in a county or state correctional facility, a school or a bar. Additionally, whether you are licensed to carry a gun by the state of Texas or not, you are prohibited by Texas law from displaying a deadly weapon in public in a manner that causes fear or alarm. A violation of this Texas law could result in a charge of disorderly conduct, a Class A Misdemeanor punishable by a penalty of up to 1 year in the Tarrant County jail.

Unlawful Possession of a Gun

Texas law prohibits certain classes of people from possessing guns. You may not possess any gun if:

Whether you have been charged with a misdemeanor or felony firearm charge, you need the services of an experienced gun charge defense attorney who will aggressively fight for your freedom and be sure that all of your constitutional rights are protected.

You need someone who keeps up to date on the ever-changing Texas firearms laws. For example, a new law went into effect on January 1, 2016, with more changes to take place to the gun law statutes on August 1, 2016.

If you are in the Fort Worth, Arlington, Mansfield, Tarrant County, Parker County, Johnson County, or Denton County area, you should contact the Hampton Law Firm now for a free consultation and to learn about your legal rights and options. Jeff Hampton has years of experience defending gun charges and will tirelessly work to resolve your case.