Defense Attorney for Domestic Violence Charges in Fort Worth

Have you, a friend or a loved one been arrested and charged with domestic violence in Fort Worth?

In some cases, a spouse will make false domestic violence allegations to get a strategic advantage in court for a divorce, custody, or alimony case. We know it happens, and we can help.

Family violence cases are some of the most complicated and emotional types of criminal cases because they involve violent acts allegedly committed by one spouse against the other spouse. However, you don’t have to be married or even still together to be charged with domestic violence in the State of Texas. Texas law provides a special clause so that domestic violence cases, now called family violence in Family Texas Family Code, can be filed in any situation where an act of violence is involved between spouses, parents, children, siblings, dating partners or any member of the household. However, family and domestic violence are different in Texas, the reasons why and importance of understanding the distinctions are explained in more detail below.

Similar to simple assault, Texas Penal Code, Offenses Against the Person § 22.01 states that the State of Texas will be required to prove the following elements of Assault-Bodily Injury – Family Violence beyond a reasonable doubt.

“A person commits the offense of assault if the person intentionally, knowingly, or recklessly causes bodily injury to another, including the person’s spouse.”

What is the Difference Between Domestic Violence and Family Violence in Tarrant County, Texas? 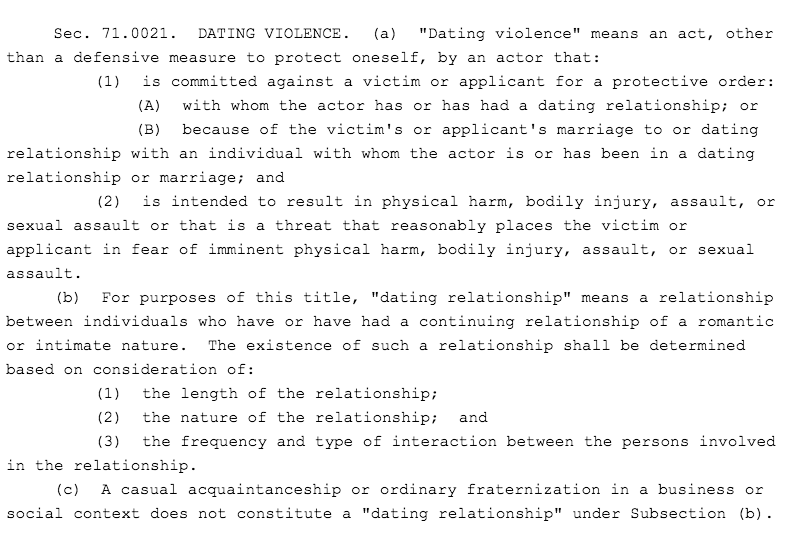 Anyone who is convicted of a domestic violence charge in Texas will be facing the following potential penalties if convicted.

The difference between facing felony and misdemeanor domestic violence charges is important; in most cases, a verbal threat and non-serious physical contact will result in misdemeanor charges, while most serious physical contact will result in felony domestic violence charges depending on the type of assault and/or the degree of injury suffered by the victim. You may also be facing felony charges if the assault involved any type of a weapon including a handgun, knife, or motor vehicle. Texas also imposes specific felony penalties for incidents involving choking, smothering, or inhibiting a person’s ability to breathe. That’s why it is important that you hire a domestic violence lawyer with experience taking this type of case to trial.

However, if you have been previously convicted of domestic violence or you are charged with choking or impeding the breath of the family member associated with your case, you could be facing a third degree felony that carries with it a punishment of up to 10 years in prison and up to $10,000 in fines.

In addition to being prevented from seeing your family member or loved one, you could also face enhanced punishment possibilities if a child was injured or a weapon was used during the altercation. Finally, receiving a criminal conviction for a domestic violence assault can result in you losing your rights to possess or transport firearms in the future.

Tarrant County Has a “No Drop” Policy for Domestic Violence Charges

If you have been arrested and charged with a crime involving family or domestic violence, you may not be aware of the fact that the prosecution may still pursue criminal charges against you even if the party that brought the charges has changed his or her mind and now wishes to drop the charges. This “No Drop” Policy that is practiced by the Tarrant County District Attorney’s Office and most other prosecutors in Texas is designed to protect victims that have been intimidated or threatened by the accused to drop the charges.

However, an unintended consequence of this “No Drop” policy is that you may now be facing serious criminal charges because your spouse or family member called the police and claimed an altercation took place simply as a means of retribution or revenge for a failed relationship or personal disagreement.

Regardless of the existence of Tarrant County’s “No Drop” policy, there are legal means available to ensure justice is done and that your case is dismissed or reduced to a ticket, ensuring your criminal record remains clean. Contact an experienced domestic violence attorney to get help as soon as possible.

If You Take Deferred or Plea, You Cannot Expunge Your Record

In some circumstances, agreeing to deferred adjudication probation and completing the probation terms successfully can make you eligible for criminal record sealing. In some cases you cannot qualify for any removal from your criminal record for bogus domestic violence charges. However, Texas law creates an exception for domestic violence cases and does not allow the sealing of records or expunction of records unless the citizen is found not guilty, has their case dismissed or their case is reduced to a deferred adjudication probation under a Class C Assault by Contact.Contact our office first so we can see what you were charged with and provide the answers you need to secure your future.

In addition to Your gun rights being at risk, there are other serious consequences if you are found guilty of domestic violence. Because your record is not eligible to be expunged or sealed, you could face other problems in the future including:

It is important to understand that in spite of the fact you have been charged with domestic violence, we know that in some cases, false accusations occur. There are numerous situations which can result in false allegations: a divorce, breakup, request for change of visitation status or custody petitions. False allegations are harmful to defendants but in the long run they are also very harmful to those who have a legitimate concern about their safety.

If you’re facing domestic violence charges in Texas and you know you’ve done nothing that rises to a criminal charge, make sure you discuss your relationship with the accuser with your defense attorney. While Texas does have a “no drop” policy, it’s important to remember that it is possible to prove you are not guilty. Perhaps you were not at the location where the alleged violence took place or you have witnesses who can provide you with proof that the violence never took place.

When someone is charged with domestic violence, a series of events are set in motion that are difficult to stop. However, Tarrant County recognizes that in some cases, domestic violence can often be avoided if both parties seek early intervention. They offer classes to abusers and potential abusers ranging from drug and alcohol education to individual and family behavioral counseling. Those who are charged with domestic violence may be required to participate in an Anger Management Program (AMP) or Batterer’s Intervention & Prevention Program (BIPP) in Tarrant County.

As you can see, it is critical that you hire a domestic violence defense attorney that understands this specific area of Texas law, and can ensure every option is explored in your case.

Whether you have been charged with felony or misdemeanor domestic violence, the Hampton Law Firm will carefully investigate and analyze your case and will fight to protect your freedom and your legal rights. Call now to schedule a free case review with Jeff Hampton, an experienced, aggressive domestic violence defense lawyer. Whether you believe you have a rock-solid alibi or you are uncertain about the reasons or legality of your arrest, call a domestic violence defense attorney immediately. Remember, the less you tell law enforcement, the better off you will be in the long run. You have a lot to lose if you are found guilty of domestic violence charges.

Do yourself a favor; even if you know you are innocent and it pains you, keep your mouth closed until your lawyer arrives. Call 817-435-2909 now to schedule a free and confidential consultation with our law firm.