Assault of a Public Servant Charges

Have you been charged with assault of a public servant in Tarrant County, Fort Worth, or somewhere else in north Texas? If the answer is yes, you need to hire an experienced felony assault lawyer. Facing assault charges in a Texas criminal Court is frightening enough, but when the charges involve a public servant the stakes are even higher. Assault of a public servant in Texas is a third degree felony, even if no physical contact occurred! There are many scenarios in which a police officer, security guard or firefighter could be injured accidentally. Furthermore, in some allegations of assault on a public servant there was never an injury or actual physical contact. In some cases a simple graze or defensive block to protect yourself can be twisted by law enforcement, and you can be falsely accused of assault on a public servant.

That’s why you need a strong legal team on your side. An experienced lawyer for assault of a public servant charges is your strongest hope of beating the charges or having them dropped altogether.

What is Considered Assault of a Public Servant Under Texas Law?

Texas Penal Code § 22.01 Assault (b) defines assault of a public servant as a 3rd degree felony in more detail below: 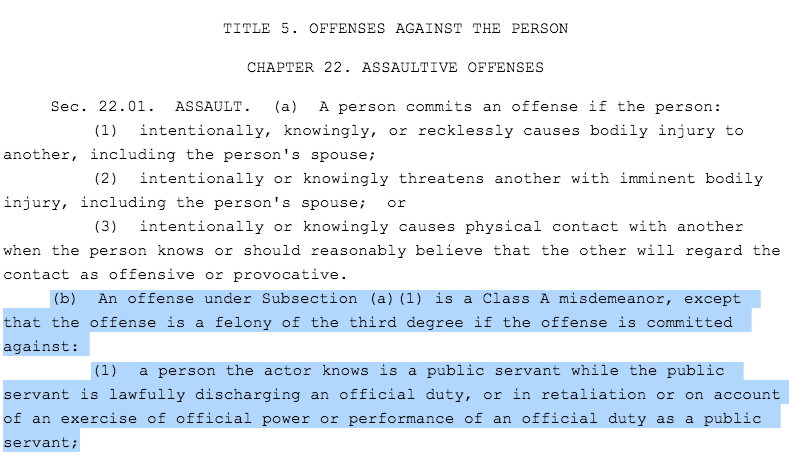 Texas Penal Code drills down further into the specific circumstances, presuming that the accused should know that the alleged victim was a public servant if they were wearing an easily identifiable uniform or badge. It also lists out specific people that can be thought of as public servants: EMTs, paramedics, law enforcement and police, security guards, firefighters, and emergency room personnel.

However, there is one very broad generalization at the end of the section about how Texas defines emergency services personnel that is of particular concern. The law states that emergency services personnel includes people working in all of the positions above “and other individuals who, in the course and scope of employment or as a volunteer, provide services for the benefit of the general public during emergency situations.” This broad generalization in Texas Penal Code makes it too hard for some prosecutors to resist elevating simple assault charges to assault of a public servant, when the alleged victim is in fact not a public servant.

How Can Someone Get Charged with Assault of a Public Servant?

While the charges of assault of a public servant are serious, many times the alleged aggressor had little or no control over the circumstances leading up to the charges. A couple of scenarios that exemplify these circumstances include:

As you can see, each of these incidents is clearly different but each could result in felony charges being lodged against you.

What is Aggravated Assault of a Public Servant?

What is the Punishment for an Assault of a Public Servant Conviction in Texas?

In Texas, simple assault of a public servant is considered a third degree felony charge and the punishment you’re facing if convicted is dismal. The possible prison time for a conviction is 10 years, plus an additional 10 years of probation and a fine of up to $10,000. Keep in mind, the maximum punishment means 25 years of being forbidden to own a firearm, 20 years of not voting and a lifetime of having to list a violent felony conviction on job applications.

If No Physical Contact Took Place Can I Be Convicted?

Yes. It is imperative to understand that only proving a threat of bodily harm is necessary for you to be convicted of assaulting a public servant, no physical contact needs to take place.

In the event there is any type of weapon involved in the assault, the crime is enhanced to “aggravated” and the punishment is even more severe. If the charges are upgraded to aggravated assault of a public servant, you’re looking at a first-degree felony. If convicted, you could be facing life in prison; should the public servant lose their life, you could face the death penalty in Texas if found guilty. That’s why you need an experienced assault of a public servant lawyer.

What Possible Defenses are there for Assault of a Public Servant Charges?

One of the most important distinctions between simple assault charges and assault of a public servant is that the alleged aggressor must have known that the alleged victim was a public servant at the time of the incident. If they cannot prove that you knew this, then the charges have to be at least lowered to simple assault (a misdemeanor in Texas).

There are a few other ways to dispute these charges, even when there are witnesses to the altercation. Someone in fear for their safety or the safety of a family member may claim they acted in self-defense; this strategy is considered an affirmative defense. In an affirmative defense, you admit to the assault but offer justifiable reasons. Someone who has been drugged against their will, suffered a head injury that rendered them unable to logically understand the person was a public servant, or proving the act was unintentional may also be used as defenses. Your defense attorney will discuss all possible options with you.

Contact a Defense Lawyer for Assault of a Public Servant Charges

The first decision you need to make after being charged with assaulting a police officer, emergency services personnel, or other public servant in Tarrant County is who you’re going to hire to defend you. If you’re facing assault of a public servant charges, call the Hampton Law Firm at 817-877-5200 now. Jeff Hampton has years of experience and has taken hundreds of cases to trial, resulting in favorable verdicts. You need an attorney with the acumen necessary to gauge the entire situation, form a strategic defensive plan, and unleash an offensive assault on the prosecutor’s case. Give us a call or fill out an online form to schedule a free case review.